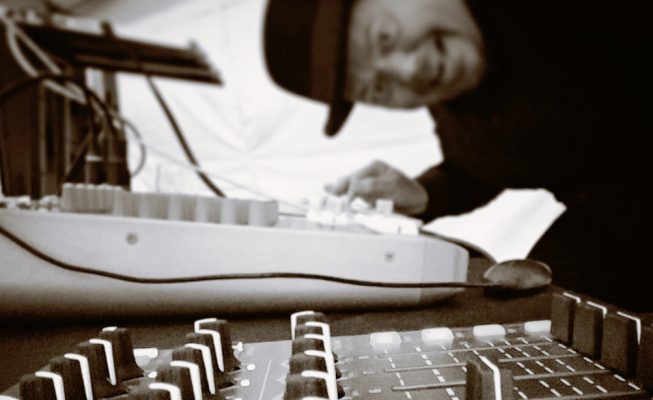 Standing well over 6 feet tall with an ironic bowler hat at a jaunty angle Atom Smith cuts quite a figure in his native Los Angeles, California. As a musician, producer, Dj, remixer, songwriter and audio engineer his first solo EP ‘Flashin Like Gatsby’ was released in 2018 by UK independent record label, Freshly Squeezed. He has since shown himself a master of the collaboration frequently bringing in friends from not only the local L.A. scene but as far afield as New York. Guests include burlesque divas, fellow DJs, swing dancers, film-makers, west-coast rappers and even a Hollywood Big Band arranger. Coupled with his sharp-suited beats and full bass sound this inclusive party-in-the-studio approach is what gives Atom his unique spin on vintage remix and electro swing. Be sure to catch his videos on YouTube!

Before that, as one half of The Gentlemen Callers of Los Angeles, Atom developed and produced almost a dozen releases, including multiple projects for film, television, and performance. Now, as an official remixer for the likes of Disney or platinum-selling Dutch artist Caro Emerald, or advert soundtracks for Party Like Gatsby his rise shows no signs of slowing especially when you consider Atom has also made frequent international DJ appearances at Glastonbury, his home-turf Burning Man Festival and Coachella to name a few.

Bass Age Big Band was his first full album on Freshly Squeezed released in 2020 – since then he’s released ONE FOR THE ROAD and STOLICHNAYA, summer party anthems for 2021 building towards a new album soon!